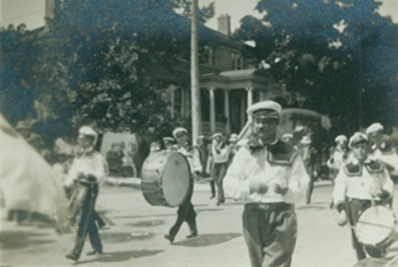 This small unit consists of Annual Reports, Directories and Pamphlets relating to the Grand Orange Lodge of British America, the Provincial Grand Orange Lodge, Ontario West, the Royal Black Knights of Ireland, Wentworth County & District of Hamilton D12 and County Orange Loge of Toronto.
The inclusive dates are 1916 to 1960.
This collection was donated by the Waterdown- East Flamborough Heritage Society (Sylvia Wray) January, 1993.

The Loyal Orange Association dates from the Accession of William III (William of Orange) to the throne of Great Britain. William III and Mary II were crowned April 11, 1689. Resistance to Protestant rule grew in Ireland into armed rebellion. The Battle of the Boyne, July 12, 1690, marked William's and Protestantism's victory. Boyne Societies began forming and were later incorporated into the Orange Society which held its first general meeting July 12, 1796.
In 1829 Ogle Robert Gowan, active in Irish Orangeism, came to Canada. The Grand Orange Lodge of British North America was formed at a meeting January 1, 1830 with Ernest, Duke of Cumberland as Grand Master and Ogle R. Gowan as Deputy Grand Master. Ogle Gowan received the warrant for the Grand Lodge of British North American from the Loyal Orange Institution, dated from London, April 23, 1832 (St. George's Day). By 1833 the Order was fairly well established in Ontario, especially where United Empire Loyalists had settled.
The organization was split into a Supreme Grand Lodge and Provincial Grand Lodges in 1860. Ontario West section came into being February 21, 1860. Thereafter the Grand Lodge of British North America was known as the MW Grand Lodge of British North America and the title RW was prefixed to the Provincial institutions. In 1867, with Confederation, Ontario West Grand Lodge changed to Western Ontario.
Despite legislation forbidding the organization in early years, the Grand Orange Lodge marched every July 12th to commemorate the victory at the Battle of the Boyne. Hamilton had many Lodges during the heyday of the Lodge and was home to the first women's lodge in Canada. The Orange Hall was at 175 1/2 James Street North and the cornerstone was laid August 12, 1905. They burned their mortgage in 1949. Parades in Hamilton were very popular into the early 1960's with the 1924 parade seeing an attendance of over 20,000 people.
The Orange Lodge has dwindled down to a few members now.
see: The Story of Orangeism. 1960 (1941, 1949) R363 Sa87 CESC