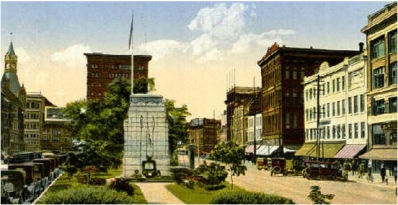 The process of constructing the monument encountered many obstacles. Much to the chagrin of Hamilton citizens, the Canadian Club of Hamilton decided to construct the memorial of Canadian Queenston limestone. The Queenston limestone had a shorter life span and was considered to be a poorer material to use for the construction of a memorial. Fortunately, the decision was overturned and the memorial was made of granite, since it was a harder stone and required less maintenance than limestone. The magnificent granite memorial was unveiled at 5:00 p.m. on May 22, 1923 by the Governor General, Viscount Byng of Vimy. Viscount Byng was recognized for leading the Canadians into France and Flanders. During the ceremony, two minutes of silence were respected. All motion and noise ceased as motorists on nearby streets stopped to join the spectators in paying their respects to the soldiers who had died aiding the Allies in the First World War.

The Cenotaph commemorated the 53,000 Canadian soldiers, 2,000 of them Hamiltonians, who were killed during the First World War. Our soldiers exhibited great courage and prowess and earned Canada recognition in the Imperial War Cabinet. Canadian soldiers stormed the well defended natural fortress, Vimy Ridge on the western front, even though the battleground had managed to withstand attacks from both the British and French forces for over two and a half years. Canada was also granted a seat at peace conferences held in Versailles. 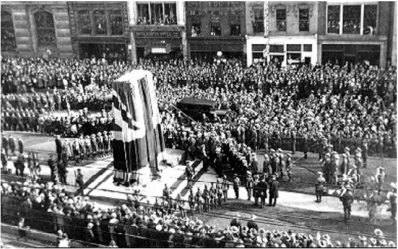 The Cenotaph is located in Hamilton's Gore Park and is a replica of the British Cenotaph in Westminster, London. The landmark consists of a huge granite column with an apparent casket at its summit. Two smaller columns are at its side. Mounted on the two columns are carved replicas of the equipment used by Canadian troops in the First World War. Three powerful words are embedded in the Cenotaph commemorating our brave soldiers who fought for freedom, “Our Glorious Dead”. Overtime, several suggestions were brought forward to the United Council of Veterans regarding the improvement of the Cenotaph. On March 19, 1953, the council received a sketch of the memorial with improvements that included bronze posts linked together by a bronze plated steel chain. The bronze posts were intended to house the badges that were issued to veterans of both World Wars. Other improvements included the addition of shrubbery and flood lighting at night. The estimated cost for the alterations was two thousand dollars. A few months later, these proposed improvements were approved. The Cenotaph stands as a gesture from those citizens who give thanks to the Canadian soldiers who sacrificed their lives in War.

“Drink! to our fathers who begot us men,
To the dead voices that are never dumb;
Then to the land of all our loves, and then
To the long parting and the age to come.”