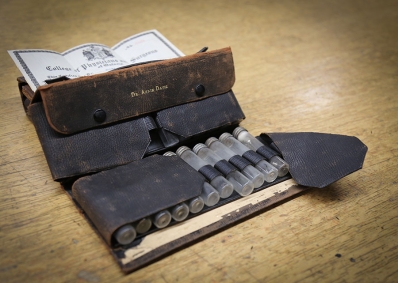 Please note: the content of this page is currently undergoing a review – Posted August 17, 2021

The Rare Book Collection consists of samples of old, rare, or unusual books as well as some modern limited editions and other works of value. Most of these books were acquired as part of the regular library collection in past years and have been transferred to this collection for safekeeping.

There are two basic sections to the Rare Book Collection. The first is the general collection which consists of a variety of books acquired mainly by transfer from other departments. The second section consists of distinct collections of books given as units by the donors.

This is a collection of approximately 1,000 books. The majority of this collection consists of books transferred from other departments due to their rarity or subject matter. There are also quite a few books that have been donated by members over the course of the library's existence. Some of the strengths of the collection include:

Several volumes of house and ornament design which have been used frequently by local artists and theatrical set designers. Local theatres also use the small collection on the history of costume. See also Lyle Collection.

The collection includes an original edition of the 29 volume set Bibliotheca Americana, a dictionary of books relating to America by Joseph Sabin. It is extremely useful to anyone researching early American and Canadian history and was used extensively in the preparation of the Hamilton Public Library's Bibliography of its holdings concerning the War of 1812.

One of the great strengths of the Rare Book Collection is works by early explorers during the last great surge of discovery, from the late 18th century through the 19th century. This collection complements the collateral collection in Canadiana of explorers in North America and Canada. Many of these books contain colonialist descriptions in English of early contact with Indigenous peoples. One of the stronger sections in this collection is the number of works related to African exploration. There are early (18th century) editions of Mungo Park's travels, as well as first editions of many of Sir Richard Francis Burton's African travel books, and works by both Stanley and Livingston. These nicely complement the smaller collection of anti-slavery books and pamphlets also held in Rare Books. These collections can be invaluable to anyone studying black history, in documenting historical attitudes towards slavery, and the colonialization of native populations. As Hamilton was one of the destinations of the Underground Railway prior to the American Civil War, this collection forms a valuable adjunct to any study of local black history. Other volumes in this collection document exploration in Eastern Europe, India, the South Pacific, and the Arctic.

This section of the Rare Book Collection contains reference works of value to local researchers. For example, the collection contains the seven volume set Famine Immigrants, which lists Irish immigrants to New York City during the Potato Famine of 1846 to 1851. Many of these immigrants subsequently made their way to Canada and to Hamilton.

Several early 18th and 19th century atlases of the world are included in the collection. These are extremely useful for documenting early map making techniques and for identifying locations which have changed names or ceased to exist. They are used frequently by genealogists attempting to pinpoint specific provinces or cities in Europe which no longer exist.

Classic examples of English language literature, some in first editions or special editions.

The Works of Robert Burns published in 1819

Poems by Christina Rossetti, published in 1910

Included here is a unique collection, locally created and bound, of early sheet music, including early Canadian and Hamilton imprints, as well as works such as "When You and I Were Young, Maggie" (lyrics by George Washington Johnson of Binbrook). There is a complete listing of the music contained in these volumes, in the in-house finding aid Music.

Holdings include early editions of the Bible in different languages (Greek, Latin, Spanish, German, Welsh), a reprint of the Gutenberg Bible, and early books on alternative religions (ie. Quakers).

One of three Canadian sets of Bell's British Theatre (1776-1777) is included in the collections. Each set is slightly different, so Hamilton Public Library's copy is unique. There are also several volumes of 18th century plays, and a first edition of Synge's Deirdre of the Sorrows.

The Latin word incunabulum (plural incunabula) means cradle, and more loosely refers to the birthplace or origin of something. It is used in reference to early printed books, and is further defined as being a book printed using movable type prior to the year 1501 AD.

The second section of this collection consists of several separate collections which were donated as specific units by the donor.

John McIntosh Lyle (ca1872-1945) was born in Belfast and emigrated with his family to Hamilton when his father, Samuel Lyle (1841-1919), was appointed minister at Central Presbyterian Church. Samuel Lyle spent the rest of his life in Hamilton, founding the Hamilton Art School, and serving on the first Board of the Hamilton Public Library.

John Lyle attended his father's school and then Yale Art School, before enrolling in the finest architectural school in the western world, L'Ecole des Beaux Arts, in Paris. After graduation, he moved to New York City and was one of the architects responsible for bringing the Beaux Art style of architecture to North America.

In 1906, Lyle moved to Toronto. His first Canadian commission was from Cawthra Mulock to design the Royal Alexandra Theatre. Four years later, he was one of the major architects designing Union Station. John Lyle was one of Canada's finest architects.

He donated a collection of architectural books to the Hamilton Public Library, in 1942, in memory of his father. He also designed the highly distinctive book plate that marks each of these books,as part of the Lyle Collection. After the move into the Central Library, in 1980, the Special Collections Department re-assembled this collection.

A finding aid for this collection was published in 1994, called A catalogue of the John M. Lyle collection of architectural books: R720.16 HAM CESH

Henry Buckingham Witton (1831-1921) was entirely self-educated and read in an extraordinarily large number of fields and in many different languages. By profession, he was employed as foreman of the paint shop of the Great Western Railway, but by avocation, he was a bibliophile and a scholar. He was the first working man ever elected as a Member of Parliament and, during his tenure in Ottawa, was involved in the selection of the first Dominion Archivist. He was intimately involved in the planning for the first Hamilton Public Library and served on the first Library Board. On his death in 1921, his will specified that his book collection come to the Hamilton Public Library and in 1922, it was transferred to the Library.