On March 12, 1857, the 6:15 Great Western Railway train from Toronto crashed through the railway bridge spanning the Desjardins Canal. The accident left fifty-nine people dead and made international headlines. The following article appeared in the April 4, 1857 issue of Frank Leslie's Illustrated Newspaper.

OVER THE DES JARDINES CANAL, CANADA.

Scenes at the Place of the Disaster!

Appearances of the Remains of the Bridge and Cars.

The Bridge and its Construction.

The Last Melancholy Scene at the Bridge. 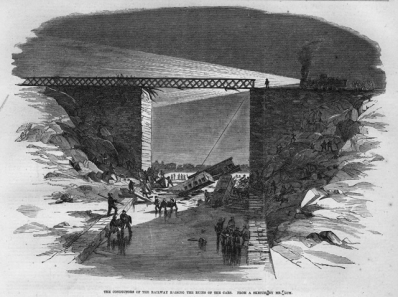 The conductors of the railway raising the ruins of the cars. From a sketch by Mr. Lum. (Frank Leslie's Illustrated Newspaper, 4 April 1857: 273.)

The railway train from Toronto (Canada West) was due at Hamilton at a quarter past six o'clock P.M., Thursday, March the 12th. It came on from Toronto as usual, and was proceeding at a moderate speed to cross the trestle or swinging bridge of the Des Jardines canal. The chasm, sixty feet deep, over which this bridge was erected, was made by cutting an outlet for the canal through Burlington heights. At the time of the accident the water was covered with ice about two feet thick. The moment the train reached the bridge the immense weight crushed through the timbers, and the whole structure gave way, and, with one frightful crash, the engine, tender, baggage car and two first-class passenger cars broke through the severed frame-work, and leaped headlong into the yawning abyss below. The engine and tender crushed at once through the ice. The baggage car, striking the corner of the tender in the act of falling, was thrown to one side and fell some ten yards from the engine. The first passenger car rushed after, and turning as it descended, fell on its roof, breaking partly through the ice, and being crushed to atoms, while the last car fell endways on the ice, and, strange to say, remained in that position.