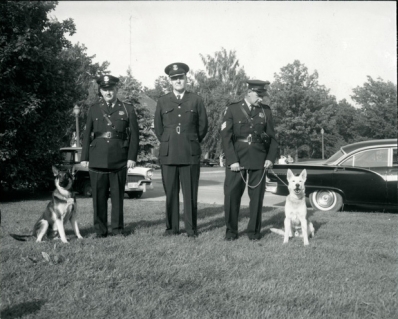 "Police dogs are used with success elsewhere, let's give them a trial period here," recommended Police Chief Leonard G. Lawrence to the Board of Police Commissioners. The Board agreed. Since July 1, 1960, the citizens of Hamilton have benefited from this important decision to add the unique abilities of canines to the police service.

Citizens donated two beautiful and intelligent German Shepherd dogs: "Sandy" was given by Mr. and Mrs. A. Ogilvie, No. 53 Highway, Hamilton. "King" by 8 year old Johnny Newcombe, 150 West 24th St., Hamilton. K-9 "Sandy" is now handled by Police Sergeant John Brabbs. K-9 "King" is handled by Police Constable Richard Griffiths. Each dog is fed and kept in an outdoor kennel at the handler's home. The specialized experience of a veteran dog trainer is obtained from Mr. Henry Alferink, who spent the last 11 years of his 30 year police career in Holland training police dogs.

Formal training classes continue twice weekly, with additional daily drills keeping the dogs alert and in top physical condition. After the basic obedience training was over, they quickly learned how to find and fetch various articles like keys, bottles, wallets, tools and guns. Their keen noses enabled them to out-class their two legged colleagues in searching for lost persons, burglars hidden in large buildings or trailed through city streets and back alleys.

A word or gesture usually directs the dogs, but they will immediately defend their masters from attack, tackling even an armed person firing a gun at them. In sharp contrast to this fierce courage in combat, both dogs are gentle enough to enjoy playful rough-and-tumble with the officers' young children. 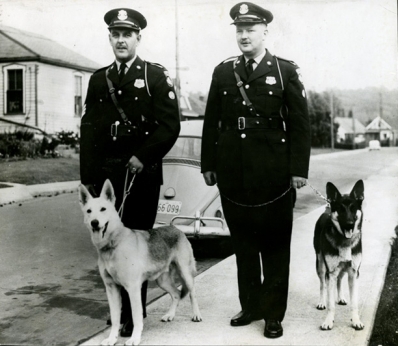 When they approach a lost child, the dogs are trained to sit and bark for their police handlers to come. Within the first six months of their trial period, the police dogs have been instrumental in the arrests of prowlers, burglars, and even careless drivers. They have been particularly effective in controlling and dispersing large crowds of disorderly people. The appearance of "Sandy" or "King" quickly breaks up street fights.

Although they should not be considered as wonder dogs, they have already proven through their willing service to be an asset to the Hamilton Police Department.

Whenever a situation arised when the use of police dogs for searching or tracking seems likely, remember, it is extremely important not to foul the scent or track. Stand back and preserve the scene. Your cooperations and the handler's skill are both needed to gain the full benefits of our capable k-9s "Sandy" and "King".