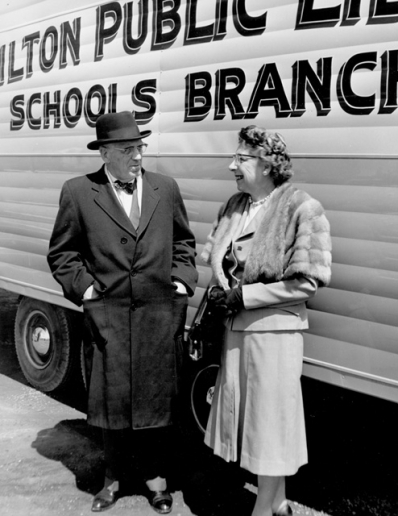 Photo of Mayor Lloyd D. Jackson and Freda Waldon, Chief Librarian in front of a Bookmobile in 1961, Hamilton Spectator

Freda Farrell Waldon was born in Winnipeg on August 29, 1898 and moved to Hamilton at the age of one year. She attended Central Public School and Hamilton Collegiate Institute. She then went to the University of Toronto, where she obtained her Bachelor of Arts degree in 1919. She went to Columbia University in 1924 to complete her course work for an M.A. in English. Her thesis, on Alexander Henry (the elder) was completed in 1930 and her degree was awarded in 1931.

In November of 1926 Freda Waldon took a position as a substitute in the Circulation Department of the Hamilton Public Library. In January of 1927 she was appointed head of the Cataloguing Department. In 1930 Miss Waldon took a leave of absence, first to attend the School of Librarianship at the University of London, and second, to take up a Carnegie Fellowship in order to prepare a bibliography of Canadiana published in Great Britain up to 1763. This bibliography was finally published, posthumously, in 1990. On her return to Canada she set her mind to transforming the Hamilton Public Library into a first rate resource by improving the catalogue and the book collection believing that "the aim of public libraries is to build good collections and to organize them for use".

During the early years of World War II she took on increasing responsibilities due to the illness of the chief librarian.

In June of 1940 Freda Farrell Waldon became the acting chief librarian of the Hamilton Public Librarian and on October 1st the position was made permanent. Miss Waldon's administration of the Hamilton Public Library was marked by a steady growth in prestige and usefulness. Before her retirement, the collection was the fourth largest in a public library in Canada, circulation had grown to the third largest, and a nation-wide reputation had been gained for the quality of the reference service offered.

Dr. Waldon's view of library service to the community extended far beyond the provision of information and good reading. In 1942 she organized Hamilton's first adult education conference. She campaigned for a new art gallery. Dr. Waldon served on the executive of the Ontario Library Association and served as the first president of the Canadian Library Association. She helped write the brief that led to the creation of the National Library of Canada. Her part in this long campaign was cited in May of 1954 when she received an honourary Doctor of Laws degree from McMaster University in recognition of her contribution to Canadian librarianship.

Dr. Waldon retired from the Hamilton Public Library in 1963 but did not stop her community involvement with such groups as the Dundurn Castle Restoration Committee, the Head-of-the-Lake Historical Society, the United Nations Association, the Hamilton Association for the Advancement of Literature, Science and Art, and many others too numerous to mention. Dr. Freda Farrell Waldon died in 1973.