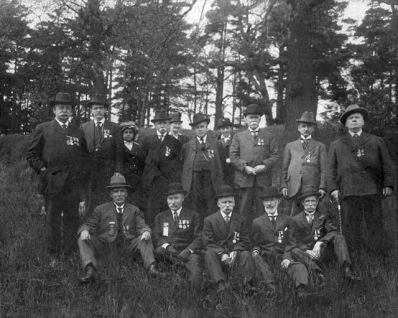 Veterans of the Fenian Raids

The Irish Position in British and in Republican North America. A Letter to the Editors of the Irish Press irrespective of party By the Hon. Thomas D’Arcy McGee, Minister of Agriculture and Emigration, Canada. Montreal: M. Longmoore & Co., Printing House, 1866
R301.4519162 M173 CESC

Narrative of the Fenian Invasion, of Canada, by Alexander Somerville, with a Map of the Field of Combat, at Limestone Ridge. Hamilton, C.W.: Published for the author by Joseph Lyght, Bookseller and Stationer. Printed by A. Lawson & Co., 1866
R971.064 So54 CESH

Correspondence relating to the Fenian Invasion, and the Rebellion of the Southern States, Printed by Order of Parliament Ottawa: Printed by Hunter, Rose & Company, 1869
R971.048 C16 CESC

The Historical and Scientific Society of Manitoba. Transaction No. 32 – Season 1887-8. The Abortive Fenian Raid on Manitoba. Account by one who knew its secret history. A paper read before the society, May 11, 1888. by Hon. Gilbert McMicken, second vice-president of the Society. Winnipeg: Manitoba Free Press Print. 1888
R971.071 M228 CESC