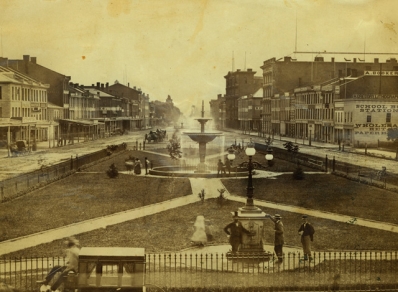 Gore Park, or the Gore on King Street as it was called during the early years of its existence, has raised strong opinions among Hamiltonians since the beginning of the 19th century. Concession 2 lot 14, Barton Township, was part of the original Crown Grant to John Askin on July 10, 1801. He sold the lot to Nathaniel Hughson, Sr. who then sold it to James Durand around 1806. On January 25, 1816, Durand and his wife sold off their land to George Hamilton and left town (1).

George Hamilton became a ceaseless promoter of his new town. He actively encouraged settlement and busied himself laying out streets and planning a town centred on a Courthouse Square (2). He also owned an odd shaped piece of land, which, when combined with a similar piece to be given by Nathaniel Hughson, formed a Town Square right in the centre of Hamilton. Hughson reneged on his part of the deal and this triangular area of land remained undeveloped, the centre of the property being used by the adjacent merchants as a dump. The Gore on King Street, as it was now called, was a major problem.

In 1833, council voted to take possession of the Gore as the site for a market.  In an early form of expropriation, a stake was driven into the Gore to signify the City’s intention. A copy of council’s resolution was sent to George Hamilton. On receipt of the resolution, George Hamilton launched a lawsuit against the city to prevent the usage of the land. He was victorious and the city was forced to halt their expropriation, scrapping their development plans and obliging the City to pay court costs of £21.5.5 (3). George Hamilton died intestate in 1836, and his eldest son Robert Jarvis Hamilton returned from Texas to take over (4).

As the town became a city in 1846, an economic slump hit Upper Canada and the City Council became worried about sources of revenue. A proposal was developed to sell the land for development. Robert Jarvis Hamilton immediately put forward his claim to the land, his father having never deeded it over properly. City Council struck a committee consisting of three aldermen to find out their legal position with regards to the Gore.

The committee commenced discussions with Robert Jarvis Hamilton and, after considerable wrangling, brought in their final report: an agreement between the city and Robert Jarvis Hamilton to split the area and develop both sections with the construction of buildings. Robert Jarvis Hamilton was to receive £2,000 for waiving his rights to the City's section. The City Solicitor was requested to look into the matter and he neatly sidestepped this potential land mine by passing the question on to the Solicitor General. While waiting for his opinion they advertised their intentions in the Hamilton Gazette which, to their astonishment, produced a letter from 74 residents expressing surprise at their decision and protesting the proposed subdivision of the Gore into building lots (5).

The Solicitor General's response was heard on April 12, 1847 and, to Council's chagrin, he ruled for the citizens, stating that "no power is given to close up a square, which this piece of land in question must be considered, and to grant building leases or to build houses thereon, either with or without the consent of the owner of the soil, and if the Council were to attempt to exert such a power, they might be stopped in its exercise by an injunction from Chancery." The Council bowed, albeit reluctantly, to the will of the people and gave up their idea of subdividing the Gore for building lots.