Chronology of Cities, Towns and Townships in Hamilton 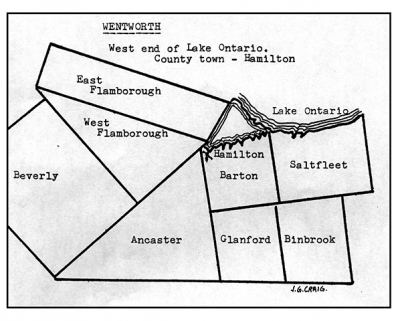 This information contains a chronology of Cities, Towns and Townships in Hamilton, from their original survey and naming through to the present City of Hamilton.

The townships at the Head-of-the-Lake were surveyed and named.

The Home and Niagara Districts were created.

The Niagara District consisted of the Counties of Lincoln (four ridings) and Haldimand. This district included much of what became Wentworth County.

The Home District consisted of the County of York including the west riding which held the townships of Beverly and Flamborough.

On March 22, 1816, a new district was created out of the old divisions of the Home and Niagara Districts. The new Gore District was named after Sir Francis Gore (1769-1852), Lieutenant-Governor of the colony. This district consisted of the two counties of Wentworth and Halton. At this time the boundaries of Wentworth County were not yet permanently fixed so it was determined that Wentworth would encompass the Townships of Saltfleet, Barton, Binbrook, Glanford, Ancaster and “so much of the County of Haldimand as lies between Dundas Street and the Village of Onondaga”.

The first elections were held and 26 citizens were chosen to represent the townships of Gore.

The Baldwin Municipal Act was passed.

The north-west portions of the old Gore District were combined to form the County of Brant but remained grouped with the United Counties of Wentworth and Halton.

Brant County separated from the United Counties of Wentworth and Halton.

The last of Barton Township was annexed by the City of Hamilton and the township ceased to exist.

The Regional Municipality of Hamilton-Wentworth came into being.