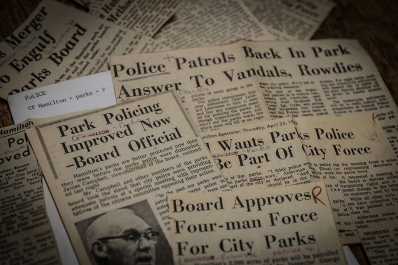 In the early 1940's, vandalism and other occurrences began to increase in frequency in Hamilton's parks. A man by the name of Fred Marshal, one of Hamilton's parks superintendents, was worried about these incidents. In 1943, Mr. Marshall decided to hire George James, the first Parks Policeman, and also the first man hired in this type of position to have only one arm, to patrol Gage Park and help solve the problem. Almost overnight, Gage Park became a safe place for women and children. Before his first season was over, George had so won the respect of the children of the fast developing district that he had a thousand or more young assistants to tip him off when trouble started brewing. So pleased was Fred Marshall as the experiment progressed that he encouraged Mr. James to expand his efforts. As the years rolled by, George managed to recruit men to patrol other parks in the city. These men shared his views and his dedication to park discipline. They were moulded into a specially-trained force, willing and able to perform their duties of constant vigilance. They were a select and loyal crew. Little misdemeanours which could grow into major crimes were nipped in the bud. Crime was not given a place to start.

The creation of a Hamilton parks police force had reduced destruction in Hamilton parks to negligible proportions. The idea behind a parks police force was to get on speaking terms with all children in the various parks, and if they did something wrong, to get them on a minor offence so that they wouldn't have the opportunity to commit a more serious crime. The men patrolled the park at irregular hours. They were special constables with all the powers of regular policemen.

Policing the parks meant a 14-hour day which included detaining prowlers, drunkards, and other offenders until the city police could reach the scene and take over. Besides dealing with instances of damage to parks property, first aid cases, prowlers, and investigation, the police were subject to calls at home, before their regular duty started at 2 p.m. An 8-hour day was no longer possible, and they had neither Sundays, Saturdays, nor holidays as time off. Hamilton had an excellent parks police force - one which was the envy of many other communities in the country.