Branch Services: Takeout. Pick up holds, Print on the Go and Makerspace projects. Staff will retrieve and check out items for Members. Branches are open Monday-Friday 10-6, Saturday 10-5.

On January 14 2021, HPL was notified of a Central employee who tested COVID-positive. While at work, the employee was wearing appropriate personal protective equipment and maintained physical distancing. A thorough cleaning and disinfection of Central's Basement, Floor 1 and Floor 2 was completed. HPL is working with Hamilton Public Health for contact tracing. We wish the employee a quick and full recovery.

Bookmobile service is paused until Saturday January 16, 2021 as a precautionary measure, so we can deep-clean after a staff member at Central staff went home ill and another was notified as a close contact of a COVID-19 positive case. Bookmobile items on affected floors are being quarantined out of an abundance of caution.

If you are having difficulty accessing the Kids, Teens, and Local History pages, please try clearing your browser’s cache. We are working to resolve this issue. Thank you for your patience.

Print on the Go service is currently unable to print fillable government documents. We are working to resolve the issue. All other uploaded documents are printed by branch staff upon arrival. 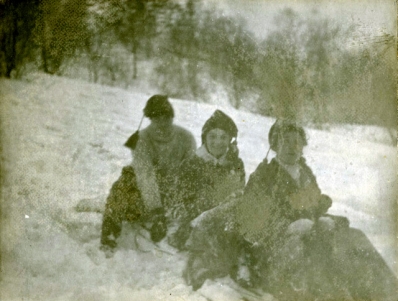 During the 1880's tobogganing was a great craze in Hamilton. There were two large wooden slides built during this time. The Victoria Toboggan and Snowshoe Club built a slide near the head of Victoria Avenue South, at the base of the escarpment. The Hamilton Toboggan and Snowshoe Club operated their slide due south of the corner of Aberdeen Avenue and Locke Street South, also at the base of the escarpment. The clubs were so popular that they had to limit their membership to 100 people each even though many more were eager to join.During the winter carnival of 1887 the slides were opened to the public. A Hamilton Spectator reporter was on hand to describe the scene:
“Everybody enjoyed themselves from the old folks who just went to the foot of the slope and looked at the illuminations, and nearly got cross-eyed trying to distinguish some familiar face in the loaded toboggans that flashed past them every moment and vanished into the gloom, to the pretty country cousin who enjoyed for the first time the novel and somewhat thrilling sensation of sliding down the straight and narrow way under the guidance and direction of her experienced city cousins and especially her big brother. 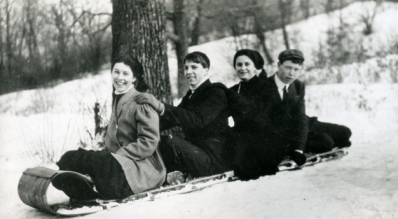 The cheerful, ubiquitous and restless small boy was on hand very numerously, and, as he had to give place to the big folks on the toboggans, he had to solace himself by sitting on the edge of the slide and snorting sudden grisly blasts through the blithesome kazoo in the ears of the panic-stricken novices who were being initiated into the seductive pleasures of the slide, and, who, sitting in the toboggan with straining nerves and dilated eyes, seemed only to want that gruesome sound in their ears to confirm their previous impression that they were making a descent into Hades."
Hamilton Spectator, February 2, 1887