By 1929 the Spectator was referring to city hall as "antiquated and inadequate". The newspaper suggested that rebuilding the hall was a necessity (49). 1944 found the paper calling the building a "firetrap" (50). In 1947 the pinnacles were denounced as dangerous, with the case of Smokey the City Hall cat, who fell two floors and walked away unharmed cited as evidence that the balustrade should be made more safe (51). Official debate had to wait until 1946, once the immediate problems created by the war had been put aside. The press reported on some of the problems facing city hall: patches of corroded marble were coming off the walls of the basement offices of the tax office, repaired linoleum in the office of the city auditor was alleged to resemble a patch-work quilt, plaster was peeling, walls needed washing (52), and the third floor in the north-east portion of the building was sagging (53). 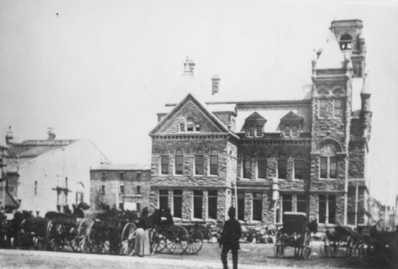 The first official assault on city hall was fired by E.G. Faludi on publication of his Master Plan for the Development of the City of Hamilton published in 1947: "The City Hall, built in 1888, can no longer fulfil either the present or the future needs for efficient administration. The building is obsolete, and too small to accommodate the expanded functions of the civic administration. A number of municipal offices have had to locate elsewhere, to the inconvenience of both the taxpayer and the departments concerned. The existence of the City Hall on its present location is an obstacle to the improvement of the central commercial area and to the elimination of the most pressing traffic problems of the City. It occupies valuable commercial frontages, which could be utilized for modern commercial buildings. It prevents the widening of the lane and of James Street, necessary for the free flow of traffic into the Market and at the James, York, King William intersection" (54).

His plan was adopted in principle but nothing was done to implement any of it. During this same period several nebulous offers floated around concerning the purchase of the old city hall, including one rather spectacular offer of $1,000,000.00 by a "reputable retail firm (not Eatons)". Eatons also made an offer to purchase at this time (55). Civic protests as council rallied to tender the market, city hall and health centre stopped these plans from going forward.