There is currently no access to the JAWS computer at Turner Park Branch. We're working to fix it and will post updates on hpl.ca. Thank you for your patience. 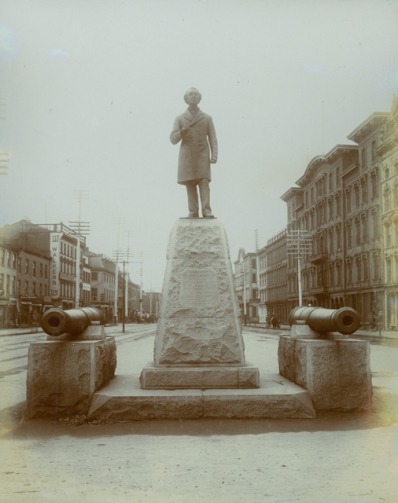 Following the death of Sir John A. Macdonald on June 6, 1891, the Hamilton Board of Trade proposed to erect a permanent memorial to commemorate the former Prime Minister. The Board believed the statue would be a credit to the City of Hamilton, and would also attract thousands of tourists. The city agreed and proceeded to establish the Macdonald Committee. This newly formed committee was responsible for generating money to fund the project. Senator Sanford believed the committee would have no difficulties raising four to five thousand dollars for the cause. Tenders were given and sculptors submitted models of Sir John A. Macdonald. George E. Wade of London, England was the sculptor chosen for the project. His model portrayed Macdonald in a buttoned up Prince Albert coat with his right hand extended.

The final statue was cast in bronze and was eight feet and three inches in height. After the completion of the project, the statue was shipped from London, England to Hamilton and arrived on October 30, 1893. The statue was immediately placed upon a pedestal of gray New Brunswick granite that stood eleven feet high and was located in the intersection of King and Hughson streets, facing west. Once the statue was mounted, the overall height was nineteen feet and three inches. The statue was then covered by bunting in preparation for the official dedication which was scheduled for November 1, 1893.

The dedication ceremony brought together many dignitaries including the current Prime Minister, Sir John Thompson. Over twenty thousand onlookers were in attendance for the unveiling. The ceremony was held and the statue was unveiled by Sir John Thompson through the use of an electric button which released the veil. The crowds reportedly cheered as the 13th Battalion band played “Hail to the Chief”.

Suggestions regarding the relocation of the statue emerged as accidents involving the statue were reported. One such accident occurred on April 5, 1905 and involved a fire rig. While racing to a fire, Fire Chief Aitchison was thrown against the base of the statue and later died of his injuries. After this accident, it was agreed that the Macdonald statue was creating traffic problems. Therefore, the city approved the decision to relocate the statue to Gore Park in 1907. The positioning of the statue would also change; from facing west to facing east. 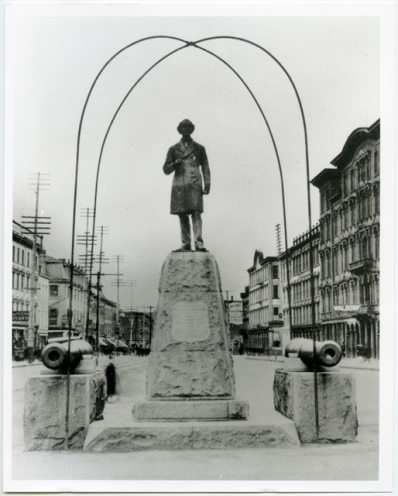 In 1954, Thomas H. Ross, a Liberal Member of Parliament for Hamilton East, suggested removing the statue of Sir John A. Macdonald and relocating it to the James Street end of the park. This would have situated the statue along side two other proposed statues of Rt. Hon. W.L. Mackenzie King and Sir Robert Borden. This suggestion created a furor within the city. There were quick reactions from many individuals who wanted the statue to remain in its current location.

The discussions regarding the movement of the statue to another location prompted many senior Ottawa officials to believe Hamilton was not interested in maintaining ownership of the statue. Ellen Fairclough, a Progressive Conservative Member of Parliament for Hamilton West, received inquires about the statue and whether it was available. She rejected the proposal suggesting the relocation of the statue. Even Controller Macdonald agreed with Fairclough and went so far as to say it would be moved only “Over my dead body”. After the debate, it was decided that the statue would remain in Gore Park. 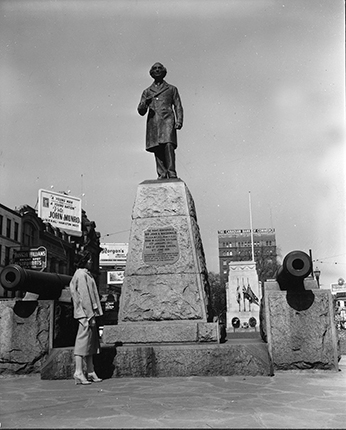 Sir John A. Macdonald was born in Glasgow, Scotland on January 11, 1815. At the age of 5, he immigrated to Canada with his parents who settled in Kingston, Upper Canada. Sir John A. Macdonald was the first Prime Minster of the Dominion of Canada (1867-1873, 1878-1891). Macdonald was a practical politician. His deals and manoeuvres made possible the creation of the Dominion of Canada and its territorial expansion across the continent. He survived political scandal to complete a program of nation-building that included policies of tariffs to protect Canadian industry, the building of transcontinental railroads, and the encouragement of western settlement. During most of his political career, Macdonald was a powerful and prominent figure in Canadian politics.