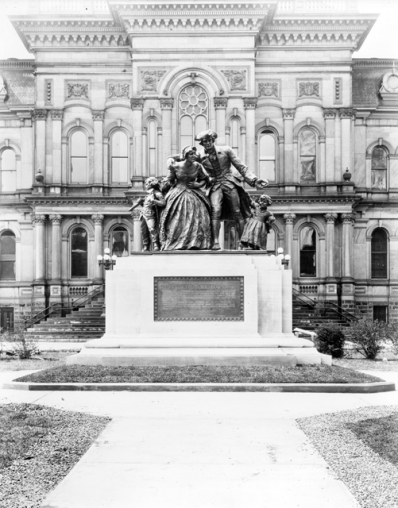 On May 24th, 1929, a great ceremony was attended by numerous citizens of Hamilton. The unveiling of the United Empire Loyalists statue, which was a generous gift to the city by Mr. Stanley Mills, brought great cheers from the crowd gathered outside the Wentworth County Court House. The statue itself is rather large, weighing three-and-a-half tons. The height of the original stone pedestal was seven-and-a-half feet, with the Loyalist himself being an additional eight feet tall. Stone for the base of the pedestal was obtained from quarries situated on the battlefields at Queenston Heights, where many United Empire Loyalists fought against invading American forces in the War of 1812. The monument was described by the Spectator as being "a wonderful work of sculptural art, symbolic of hope, faith and determination...a perpetual reminder of devotion to principle, valour and the quality of overcoming the most difficult circumstances." Two bronze panels attached to the sides of the pedestal tell the story of the Loyalists. The inscription reads:

This monument is dedicated to the lasting memory of the United Empire Loyalists who, after the declaration of independence, came into British North America from the seceded American colonies and who, with faith and fortitude, and under great pioneering difficulties, largely laid the foundations of this Canadian nation as an integral part of the British Empire. Neither confiscation of their property, the pitiless persecution of their kinsmen in revolt, nor the galling chains of imprisonment could break their spirits or divorce them from a loyalty almost without parallel.

"No country ever had such founders --

No country in the world --

No, not since the days of Abraham"

The United Empire Loyalists were distinguished for their devotion to principle, for their valour in battle during the American revolution and for their loyalty and bravery in the War of 1812 - 1814 in defense of Canadian homes and hearths. 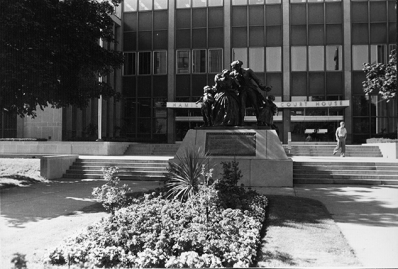 They set the stamp of their character in the institutions of this country and handed them on to succeeding generations glorified by their sacrifices, enriched by their labours and made sure by their indomitable spirit.

Dedicated to the Glory of God
Erected by Mr. and Mrs. Stanley Mills of Hamilton
In Grateful Memory of Their
United Empire Loyalists Forebears and Connections
The Davis, Gage, Hesse, Howell, Mills and Willson Families
Unveiled Empire Day
May Twenty-Third
Nineteen Hundred and Twenty-Nine
For The Unity of Empire

The United Empire Loyalists, believing that a monarchy was better than a republic, and shrinking with abhorrence from a dismemberment of the Empire, were willing, rather than lose the one and endure the other, to bear with temporary injustice. Taking up arms for the King, they passed through all the horrors of civil war and bore what was worse than death, the hatred of their fellow-countrymen, and, when the battle went against them, sought no compromise, but, forsaking every possession excepting their honour, set their faces toward the wilderness of British North America to begin, amid untold hardships, life anew under the flag they revered.

"They drew lots for their lands and with their axes cleared the forest and with their hoes planted the seed of Canada's future greatness." -- Elizabeth Bowman Spohn

The bronze statue depicts a family of Loyalists at the moment they have drawn their lot number from the government surveyor. They are looking forward with satisfaction and keenness and a little curiosity to the location of their new home in Canada, after the turmoil of many years of warfare and after having lost all of their worldly possessions. This image eventually attained national fame when a drawing of the monument was featured on a Canadian postage stamp. 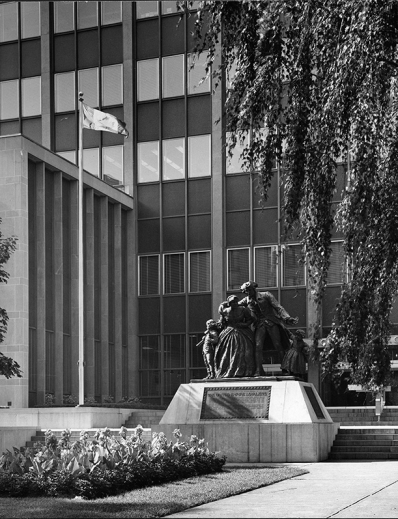 The story of the United Empire Loyalists is an interesting one. During the American Revolution, American troops attempted to capture Canada. Although they were not successful, they were able to break their ties to Britain. Despite this, about a third of the American colonists were still loyal to the British crown and were forced to take up arms for their cause. When the war was over, the Loyalists found that their property had been either confiscated or destroyed by the triumphant revolutionists and that many of them were banished under penalty of death. A great number of Loyalists were also tortured and publicly humiliated. All was not lost though, because when terms of peace were finally drawn up between the two opposing sides the British government stepped in and demanded that the Loyalists have their property restored. This was deemed to be impossible, so the British government saw fit to provide the Loyalists with new homes, the majority of these being located in the eastern half of the Dominion of Canada.

About 35,000 Loyalists came to the maritime provinces by government transport. 10,000 more went to Quebec. They had to endure great hardship, starting life from scratch. Some of them had no possessions other than what they carried. It was up to them to work the land, build their homes and find a way to survive. Considering what the Loyalists went through, and how they were able to succeed in starting their whole lives over, which was miles away from their birthplaces, it is no wonder that Stanley Mills wanted to have a monument dedicated to their history. A cornerstone box was prepared for the statue, containing a number of books which gave the history of the Loyalists. One of these was a rare volume containing a list of the names of all the Loyalists, prepared by the United Loyalist Centennial Committee in 1885, which had since gone out of print. Egerton Ryerson's two-volume work on the "Loyalists and Their Times" was also placed in the copper box, along with copies of both local papers giving an account of the unveiling ceremony.