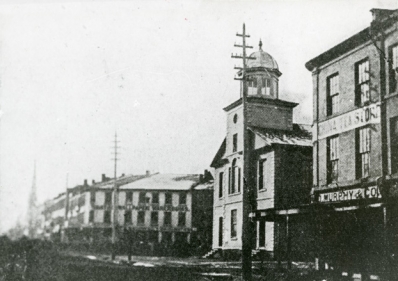 After the incorporation of Hamilton in 1846, council decided that it was necessary to spruce up the hall so that it was more suitable for their new status. It was also at this time that the Market Hall first began to be called the City Hall rather than the Town Hall. The grandeur of such new status faced its first true test in 1862 as Hamilton faced bankruptcy. The furnishings of the centre of civic pride were attached by the bailiff and ordered to be sold at auction. Some of the effects from the city on auction caused great consternation to the civic fathers, including the mayor's chair for which only $6.00 was offered. The armchairs used by councillors and aldermen went for $1.05 apiece to Mr. James Cummings, Esq. who purchased much of the goods for sale. He later loaned the items back to the city (16).

This was not the first time that the city had found itself embarrassed for funds. In 1836, before incorporation, the town had made an arrangement with the American Presbyterian Church on the east side of John Street to buy a bell for the use of the city and install it in the church tower (17). In 1838, to their surprise, a partner in the firm of bell makers from West Troy, N.Y. arrived with a debenture for payment of £100. City Council stated that "[t]he matter was this day considered by the Board, some of the members of 1836 being present, and they came to the Resolution of taking the bell and paying for the same" (18).

This was easier said than done. On December 1, 1838, the City Clerk wrote to the bell makers: "[l]aid your letter before the Board, and am sorry to say that it is out of our power to remit even a part of the sum due you immediately, as we had hope to have done long ago, but I am directed to inform you, that as soon as we can raise £50, it shall be forwarded to you, or the whole, if practical. Our collector is exerting himself to call in the taxes, in which, if he is tolerably successful, we shall not have to try your patience much longer" (19). A year later, in December 1839, the Treasurer was ordered "to give Mr. Berrie £50 in part payment of the Town Bell" (20).