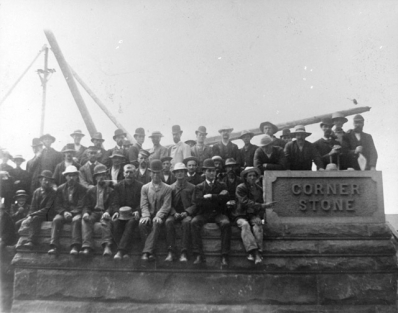 Laying the cornerstone for the City Hall, 1888

Upon the completion of the demolition, the question of the cornerstone-laying, an important occasion for speech-making and politicking, was raised. Invitations were confined to the more important civic officials and citizens who occupied or had occupied positions of public trust and responsibility (35). After a delay, the cornerstone was finally laid on July 19, 1888. The Spectator reported that "[i]n front of the scene of the ceremony, on James Street, a great crowd had gathered, leaving room for only the street cars to pass. Every window commanding a view of the scene was crowded. A lot of boys had climbed on top of Peanut Charley's stand near by, and just before the ceremony commenced the frail roof crashed under them, and the boys went down head first into the peanuts, fruit and candies. Charley was inconsolable" (36). When the city council convened on September 24, 1888 the petition "asking that the Peanut Stand...be allowed to remain in front of the New City Hall" was denied (37).

The contents of the cornerstone included a scroll, the financial statement for 1887, the voters' list for 1888, a city directory for 1888, Canadian silver & copper coins, the county directory for 1888, the Canadian almanac for 1888, copies of the Canada Gazette, the Ontario Gazette, the Dominion Illustrated, the Spectator and the Times, minutes of the Board of Education for 1887, a copy of the invitation list, photographs of the old and new city halls, City Messenger Charley Smith's photograph, and Mr. Neill's group photograph of the city hall officials. At the last minute a bill-of-fare of the lunch was thrust into the box " (37). When the cornerstone was moved in the next century to the new city hall, everything remained intact. However, the coins placed in the box were missing (38). After the cornerstone block was lowered the speeches began. Mayor Doran spoke, followed by Alexander McKay, M.P., Adam Brown, M.P., John M. Gibson, M.P.P., Warden Flatt, Alderman Moore, Sheriff McKellar and Alderman Stevenson. "By this time the crowd had thinned considerably, and though the list of speakers was not half exhausted, it was thought wise to stop the speaking right there" (37). They moved into the new city hall in January of 1890.