After the furor of the 1840's had died down, City Council tried again. A notice was put into the city paper that the City would be applying for an Act to authorize them to make use of the Gore for erection of a public building. By-Law #83 for the disposal of the Gore on King Street was signed at the council meeting on January 5, 1853. However, on February 28, 1853, Alderman Sadlier gave notice of motion to repeal By-Law #83 and by March 24, 1853 the contentious by-law had been rescinded by a vote of 10 to 5. The people had won again. Not to be bested, The Report of the Special Committee on Post Office Site was adopted July 3, 1853. Council recommended locating the new Post Office directly on the Gore. The idea was shot down in rapid order. 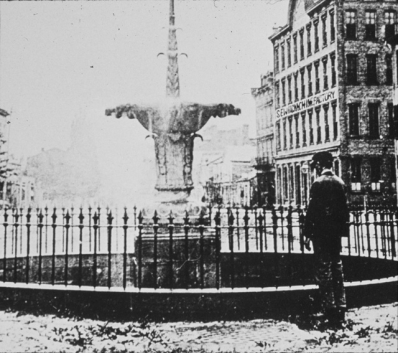 The future of the Gore on King Street was now placed in the hands of the Special Committee on Ornamenting the Gore on King Street. The committee was next heard from six years later as the city prepared for the first ever royal visit to Hamilton. The Water Commissioner proposed a fountain but the Council referred this suggestion to another committee for further study until receiving a letter from Isaac Buchanan and others proposing a joint venture. Buchanan proposed the City set aside $1,200 which would then be matched by Buchanan and his group. The local papers jumped on the bandwagon proclaiming that if a few thousand dollars was all that was needed to convert an eyesore into an ornament they should do it by private subscription. The fountain was built and the new look of the Gore on King Street was unveiled May 24, 1860.

Prior to the unveiling of the fountain council had received a communication from Archibald Kerr offering to pay to have a drinking fountain placed on the Gore in King Street. By November of that year the drinking fountain had been erected. Soon after the Park Committee tendered their report to council: "The Standing Committee on Parks beg leave to report that they have carefully examined the Park on King Street and have ordered sixteen or eighteen trees to be planted to replace those which have been destroyed by evil disposed persons in consequence of having access to the grounds at all times. In order to prevent the wanton destruction of property Your Comm. recommend the present turn stiles be removed and an iron gate placed at each of the four entrances with a lock to each, so that the public may have access only on particular occasions, when Policemen should be in attendance to keep order." This report marked the first instance of council referring to the Gore as a park. Shortly after was the first usage of the name Gore Park.

In July of 1872 council resolved to place the new Bell Tower in the Gore of King Street and asked for tenders. Citizens rose once again to the defense of their park and the Bell Tower was constructed on the originally proposed location on James Street near the market. City council finally bowed to the inevitable and on April 28, 1873 passed the Board of Works recommendation "that the Park on King Street be laid out and planted with flowers and shrubs, and the fence and fountain newly painted”. 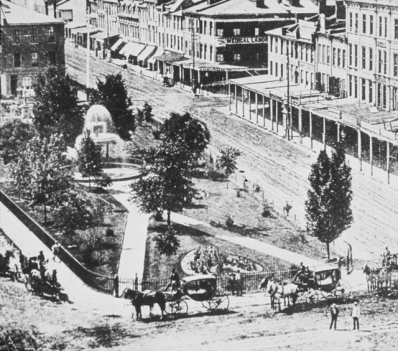 As the 1880s began, the pressing concern for Hamilton’s press was the fact that the park was always locked and the public could not enjoy its benefits. "Hamilton is the only city we know of which has a locked-up park, and we refuse to believe that the character of our people makes the exception necessary." Council dealt with this request in a less than timely manner, and it was three years before the Park was formally opened to the public on June 19, 1883. "The 'interesting ceremony' was performed at 10 o'clock...by Chief Aitchison, of the fire department in the presence of a number of citizens." Few ventured in, as they were not used to being allowed to enter their park. The gates were to be unlocked every morning at 7 and closed at 8 in the evening, with the duty to be performed by the fire department. The Spectator suggested a few improvements like benches on which to sit and enjoy the view. The park must have become increasingly popular as in 1886 the committee recommended the purchase of six “Keep Off the Grass” signs (6).

The populace began to use the Gore in increasing numbers and, on a typical summer night when a band was serenading the people, "(t)he sounds that palpitated on the air were varied. Sweet light strains arose from the band, followed by a crash of doubleforte, and amidst the comparative stillness that followed could be hears the vocal hallelujahs from the Gospel wagoners down east a block away. Then by way of variation would come the tir-rrrr of a bell operated by an ice cream artist half a dozen yards away. Added to these marked and prominent features were the almost perpetual cling-clang-cling of the motorman's bells as the cars rolled and growled along the pavement: all going to make up an evening of mild dissipation on the Gore” (7).  On May 20, 1898 a strong petition signed by 64 of the most prominent businessmen in the community, some with shops or businesses facing onto Gore Park, was presented to City council requesting the Gore Park be extended as far as John Street. The aldermen thought this was a good idea; however, no one could decide which whether the Parks or Works committees should deal with it (8).