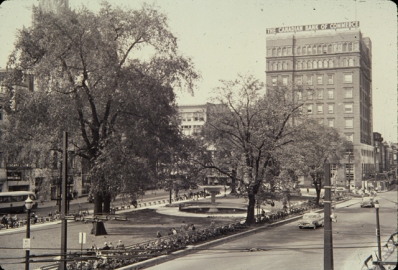 The 1950s began for Gore Park with a proposal by Alderman Mac Cline. Cline promoted the idea of a 3 or 4 level subterranean parking ramp underneath Gore Park to accommodate 1,000 cars. Above ground he proposed building shops and restaurants. He urged the creation of a Sub-Committee to look into his plan (37). He was still pushing this plan in 1954, noting that his earlier proposal had met with a "cool reception". This time he got the Chamber of Commerce and the Hamilton Downtown Association interested in his plan as a way to solve the downtown-parking problem. However the plan stalled and was dropped soon after (38).

Alderman Jack MacDonald, as chairman of the Transportation and Traffic Committee, introduced a plan that removed the western half of Gore Park entirely and turned it into a loading and unloading area for buses. Queen Victoria would be moved to a point west of the Cenotaph. He stated, "I don't want the citizens of Hamilton to get the idea that I am some kind of "young destroyer.  Everybody talks about how serious our traffic problem is becoming. This is a chance to do something about it." (39) Strong opposition appeared immediately from all quarters and his plan was shelved until the people could vote on it in a referendum. An editorial noted, "(a)ll suggestions in the past to remove or eliminate Gore Park have been furiously combated and it seems safe to say, Hamilton's most distinctive, if not its most useful park, has a secure place in the hearts of its residents, particularly the older ones. Ald. Jack MacDonald is perhaps not old enough to appreciate that yet” (40). Three years later a proposal arose to move the Sir John A. Macdonald statue to a point near the flagpole, which would leave the extension devoted entirely as a memorial to the veterans of the two world wars. "Over my dead body" was the comment of now Controller John A. MacDonald..."Sir John is doing fine where he is." Sir John stayed put (41). 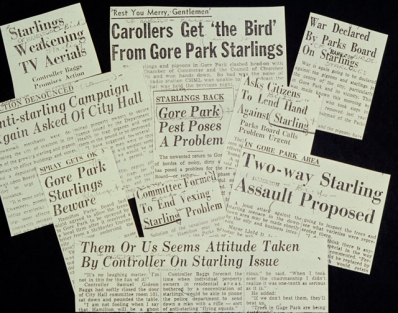 During the mid-fifties a general facelift of the park was done. The lavatories were updated and tiled, sidewalks were replaced and benches moved around. A larger problem facing the Gore reared its head in the 1950s. In 1950 the Spectator noted "The unwanted return to Gore Park of hordes of noisy, dirty starlings...The Parks Board tried letting off cartridges and firecrackers, this frightened the feathered pests off for a time, but they are now back, looking like leaves as they cling by the hundreds to the trees in the park, and roosting in rows on the ledges of adjacent buildings” (42). Feeding birds in the Park was banned and eventually in 1953 the Board of Control, after numerous complaints, set up a committee to look into the problem (43). Controller Sam Baggs was made chairman, which led to such headlines as "Baggs Bags Bird Bagging Business" (44). In October Baggs announced the successful removal of 1,200 pigeons. They had been humanely trapped, no use of poison or other noxious substances, and then trucked down to the "S.P.C.A. gas chamber and painlessly exterminated." The pigeon population was on a marked decline (45). 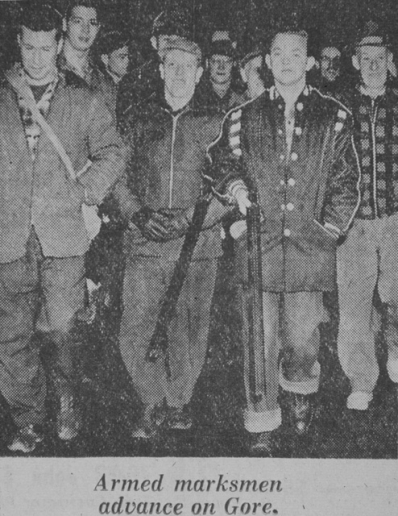 The starlings proved more difficult. A major shoot was organized for January 25, 1954. 122 hunters armed with shotguns were brought in and started blasting. One experienced hunter commented that "judging from the way some of the men were handling their guns, it is small wonder there are so many hunting accidents." About 2,500 birds were shot and the only human injuries came from the hunters not being able to duck the "falling birds that cascaded from the trees at the first blast." (46) The second great starling shoot, known colloquially on police blotters as Operation Whitewash, took place on February 2, 1954. Fifty gunners got several thousand more birds (47).