Got out of the window 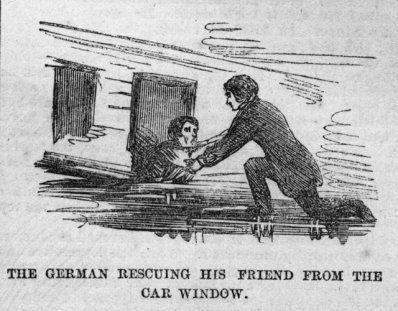 Henry August, passenger from Toronto, escaped from the first car. The escape of this person was most wonderful. He is a German; and he and the last named passenger were sitting together on the rear of the first passenger car. The moment they heard the first concussion, they got up and rushed together to the door, the latter only reached the platform. He jumped off just three feet from the chasm. The other car rushed by him and was gone. He stood for a moment paralyzed. He then ran down the hill, and was the means of saving from drowning his companion who was not in time to reach the platform. He dragged him out of a window, and comparatively unhurt.

A woman, who lives near the scene of the disaster, and who was the first to witness it, gives some interesting particulars about the two children - the Doyles - who so miraculously escaped. She rushed down the hill to the cars; indeed the poor woman literally rolled down, for it was so steep and slippery she could not keep her feet; and the first object that met her attention was the poor little girl, about eight years of age, on a cake of ice. The little thing said, "Oh, don't mind me, save my brother," and the poor little fellow was at the moment with his chin barely above the water, at the top of one of the windows, imploring some one to drag him out. The woman, though the ice was broken for some distance round the car, managed to reach him; and after rescuing him, rushed up the hill with one child in her arms, and got a passenger, who was himself badly wounded, to carry the girl on his back. She put them to bed; and strange to say, they got up with scarcely a mark. Owen Doyle, the uncle of the little girl, saved her by clasping her to his breast when he felt the car overturning, and throwing her out of the window after the crash. The little boy felt some one take him in his arms and fall under him, but he knew not whom. It is difficult to conceive a more melancholy spectacle, than these two children looking on the mangled remains of their mother, father, and nearly all who were dear to them.