The early 1980s did not bode well for Gore Park. On July 19, 1983 a city crew started the first phase of the Downtown Action Plan approved by council. Chainsaws were brought in and all the trees were removed from the park. What had taken nature 100 years to create took man several days to destroy. The public reacted with shock, outrage and anger and the community development office was flooded with calls protesting the tree removal. One woman told a police officer that "the city should be charged with murder to the environment” (52).

In December of 1982 the Du Toit firm of Toronto presented their final plan. It "called for the creation of a distinctive urban park, complete with a major sculptured fountain, a waterfall and pool, paving stoned areas for pedestrians, and substantial areas of grass, shrubs and shade trees”. The plan was approved but council, looking to save the $84,000 cost of having Du Toit supervise implementation of their plan, decided to use in-house staff. Staff’s interpretation of the plan diverged from the concept that the Toronto firm had advocated. Their changed recommended plan was passed by the planning and development committee and unanimously passed by council. The planning refinement process "that would have created an urban park in Du Toit's hands, created something entirely different in city staff's hands". 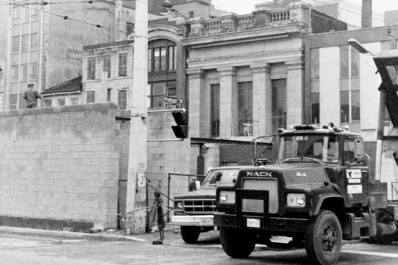 The outcry which began with the removal of the trees was nothing compared with the reaction when two concrete block buildings began construction. Tony Butler, of the Hamilton Historic Board and a local architect, attacked the plan. He reviewed the designs and stated "(t)hey are totally inappropriate to the character of the city...I'm ashamed to see what's happening in Gore Park." He believed the drawings developed by city staff had not followed the concept for the area developed by du Toit Architects of Toronto (53). Council members were caught off balance by the vehemence of the protests and, while some of them staunchly defended the plan, others "called the buildings too overpowering and monstrosities...[and] urged scrapping present plans and starting over" (54).